People occasionally ask about my studio, so to satisfy their curiosity and to promote my own brand of amateur-chic, here is my current studio rundown as originally featured in Attack Mag. 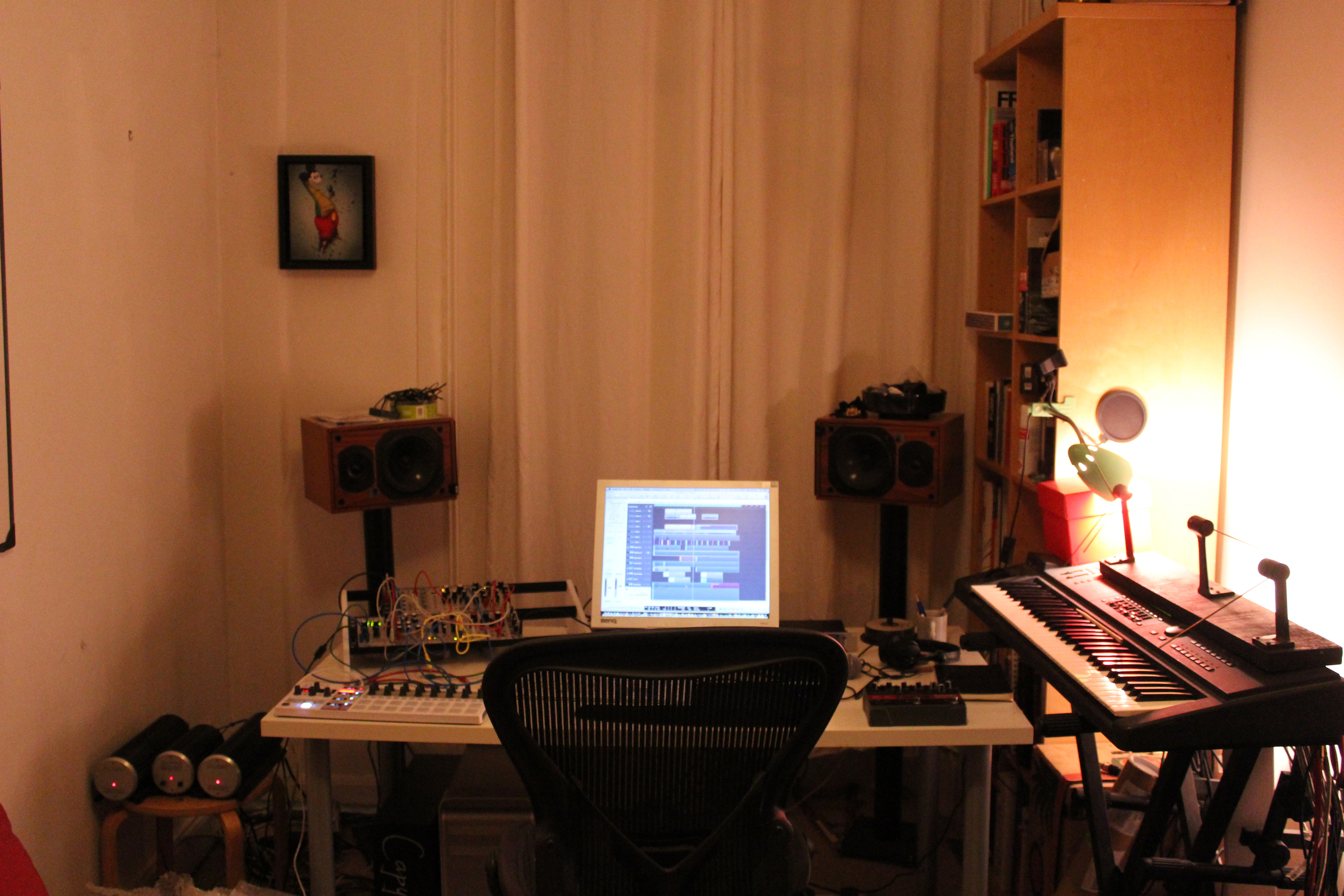 I’ve always had my studio in the house. I like to be able to work at any time the mood takes me, whether that be day or night, so it obviously makes sense to have it close to hand. I’ve never suffered from problems motivating myself, which is one of the main reasons I know people have a studio away from home, and I would gladly spend much more time working on music if my hands and back would be up for it.

I’ve got a fairly simple setup based around my 2008 MacPro, Capybara 320 & Kyma and modular synth. I’ve owned hardware synths in the past, including the Nord Modular G2 (which I miss a lot), Elektron Monomachine, and the USE Audio Plugiator but had to sell them at times of financial necessity. The Plugiator just got gigged to death until all the knobs had fallen off and the only way to control it was via an external midi controller, before it lost power forever. Now my only real synthesiser hardware is the modular synth which is perfect as it has the tactile response that encourages experimentation as well as the adjustable expansion possibilities of software. The sound in my studio is probably laughable to any professional and I use my hi-fi speakers and amp for the replay, so my advice is don’t get sucked into the trap of thinking “i need A,B and C to make music properly”. All you need is ears and consciousness. And hands probably.

I am still very attached to software for making music. I like the open-ended nature of it, the room for innovation and the fact that it is much cheaper than hardware. There are things that I can do in software which I would struggle with in any other way, unless I was so minted that I could buy any synth I saw and then a studio to put them all in. Even then, there are things that can be done in Kyma that can’t be done another way and that is what I am after: original sounds. Electronic music is about innovation for me, so the idea of using the same sounds as everyone else seems like a wasted opportunity.

Most recently I’ve started to explore recording more fully, using acoustic instruments and acoustic spaces, and using microphones in random ways. I’m certainly not interested in recording a pristine performance in an anechoic space. I like the rough and ready approach that allows for mistakes and noise, as that provides life. 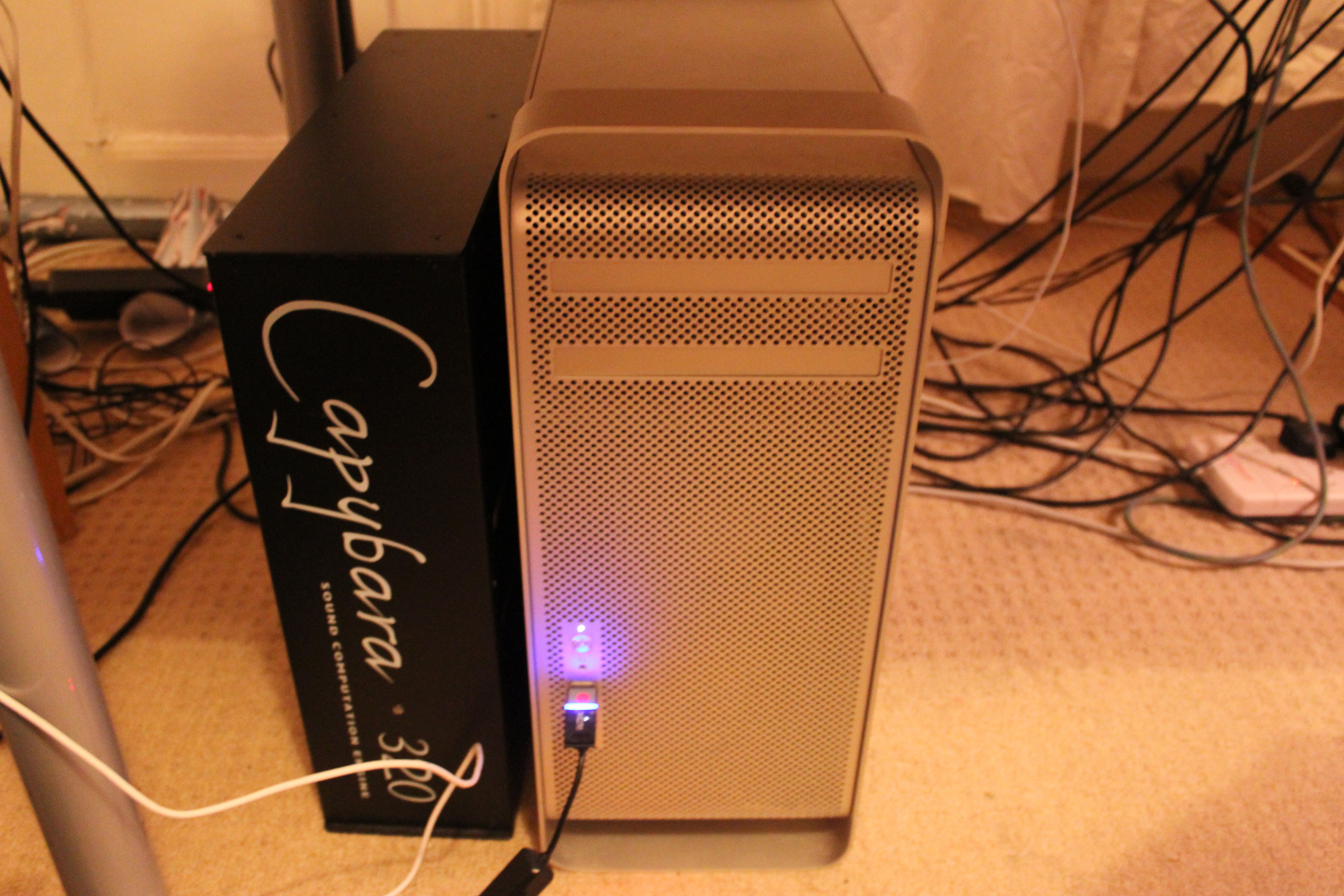 The thing that always appealed about software is its open-ended nature. If you can conceive it then you can make it happen. Luckily for me there are some very smart people who make it their business to create software that allows me that freedom. Before Kyma I’d previously been using MaxMSP to make basic patches to mess with my audio, at a time when Max was the main candidate for these jobs. I loved Mille Plateaux and all the glitchy error-noise sounds that Max could create. When I discovered Kyma, it just took that whole idea to the next logical place, as it allows even greater freedom to play with audio in a way that nothing else can. Kyma is the software and the Capybara is the hardware that it runs on, essentially a large black box with lots of audio ins and outs in the back, and at the time I bought it was the most expensive thing I’d ever purchased. Kyma is also a black box, in that it consists of building blocks to allow innumerable processes to be run on your audio, and is literally limitless in scope. It excels at bending audio to new shapes, spectral processing, granular processing, cross-filtering and any number of other synthesis methods such as FM,AM, etc etc. Where Max is best at control, Kyma is best at audio manipulation.

Here it is bending a drum loop:

And here scuttering up a vocal: 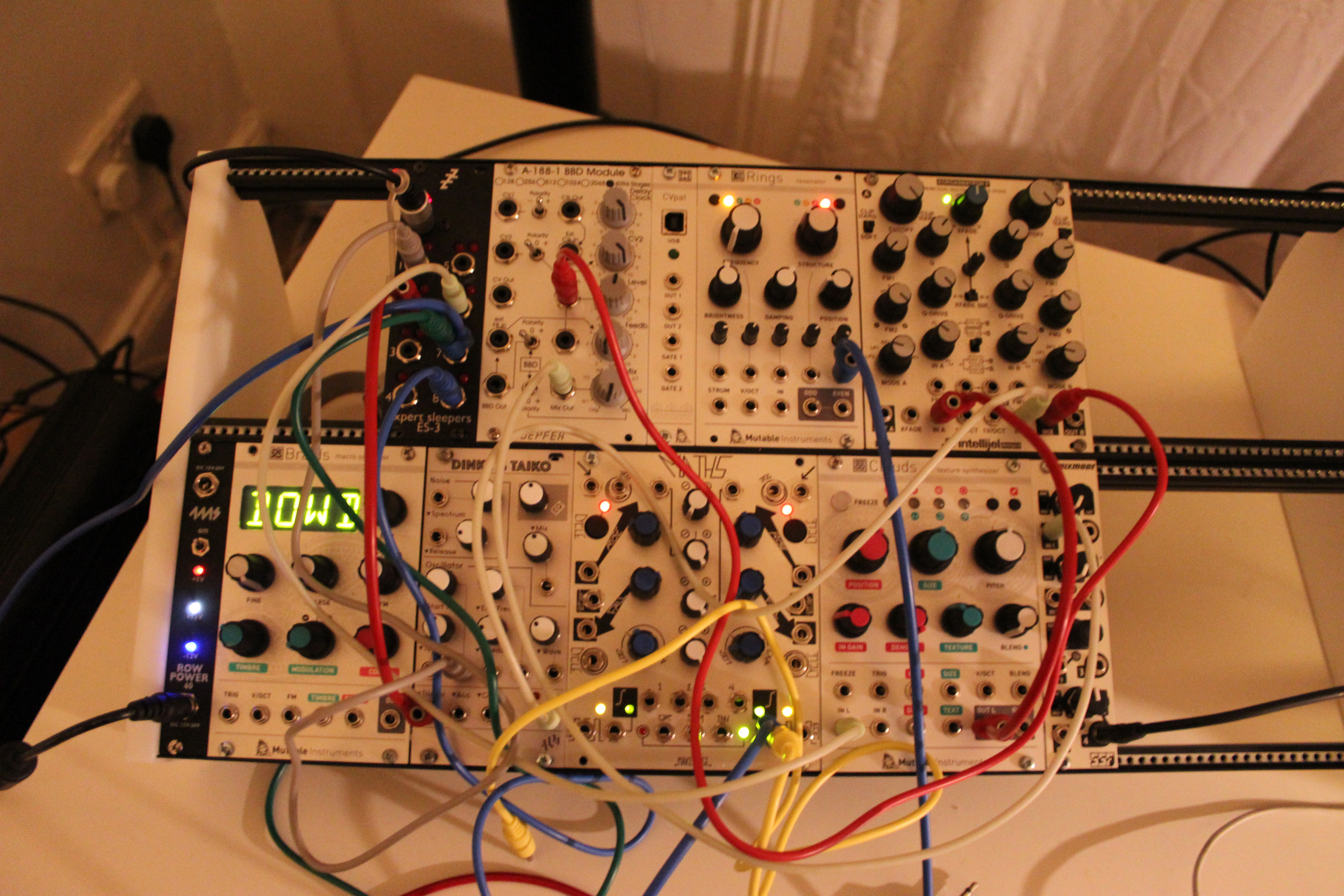 I was never a Moog man. I’d take a rusty Buchla with all the knobs falling off any day. Like Kyma before it, the modular has opened up my creative process and helped me get closer to what I can imagine. The sound it produces is alive with movement and has a real physicality to it, aided by the interplay between different modules in differing permutations, as well as the various manufacturers’ approaches to sound. Modulars have become incredibly popular in the last 5 years so there is now even greater willingness to experiment on the part of the manufacturers, away from the standard subtractive synthesis paradigm. I especially love the physical modelling modules by Mutable Instruments, and that weird middle-ground between real instrument and synthesis.

A few of my favourite things:

MUTABLE INSTRUMENTS BRAIDS – I’m sure it’s very nice to have a pure analogue oscillator that does saw, triangle and square but personally I’d rather have a digital box of tricks like Braids that has 45 synthesis models from the Saw of the Yamaha CS80 to 808 Kick and Snare to physically modelled Flute, Pluck and Blow. Even if I just had this module on its own it could still provide a huge amount of what I need, and if you factor in the other modules that can control and shape it, you can see that it is nearly limitless. On top of that all Mutable stuff is open source so if you’re lucky someone somewhere will be tinkering with the code to provide even more functions, as has happened already with many of their modules.

Here being abused by Surachai: https://www.youtube.com/watch?v=oRKYWV0yFKE

And a random audio file from my archive of one of the wavetable models:

MUTABLE INSTRUMENTS RINGS – This is one of the modules I bought as I got a bit of cash towards the end of last year, and it covers more of the physical modelling duties which I am drawn to. Things like metal beams, strings, bells, metal plates etc. Combined with all the modulations possible within a modular synth, this module more than any other can reproduce the sound of what sounds like physical instruments, but physical instruments that aren’t generally available. It also has an audio input so can be used to add colour to other parts.

ALM DINKY’S TAIKO – I once had a dream in which I was playing with my ideal drum machine, loaded with knobs (no Freud) and able to produce beautiful wonky beats effortlessly. Heavy geekdom. Anyway, if I put 4 of these drum voice modules in a rack with a sequencer and a MATHS I’d have just that. Wonky FM perfection. It can do basslines as well as a fine line in kicks, snares, bells, prhrangs, preeeerps and twiks. Magic.

INTELLIJEL KOGASMATRON – I’m always after modules with maximum flexibility and this dual filter does the lot. It has 2 flavours each of high-pass and low pass, band pass and band reject. It also has loads of CV inputs to mess with it, a V/OCT input to play the filter in key when the resonance is up, and overdrive circuits on both the resonance and the inputs. All of which means it can do a hell of a lot. 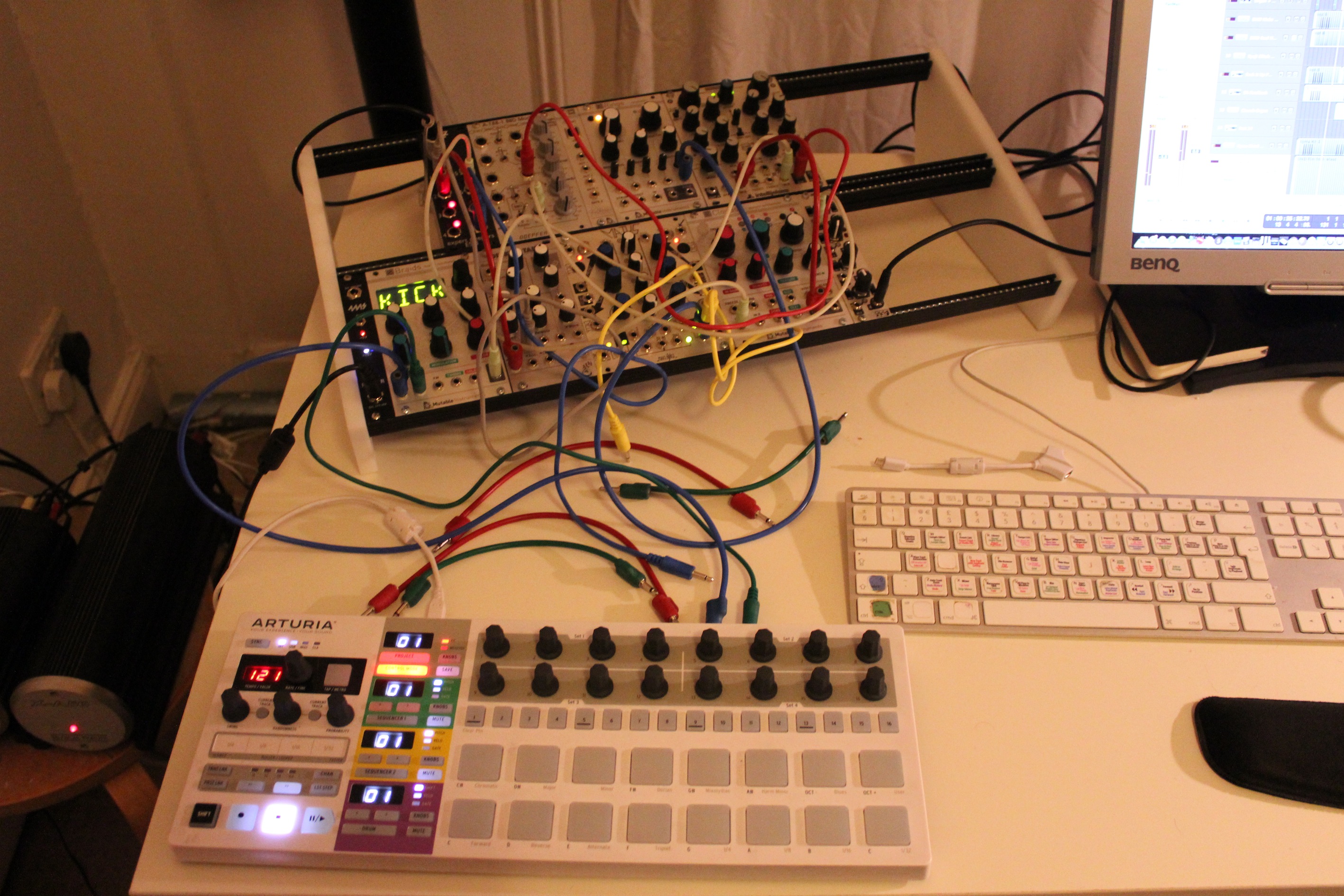 It’s still new to me but is excellent, especially for driving the modular. I don’t have any sequencer modules so this serves the purpose brilliantly, and it is a perfect fit for my live show too, doubling as a general MIDI controller. 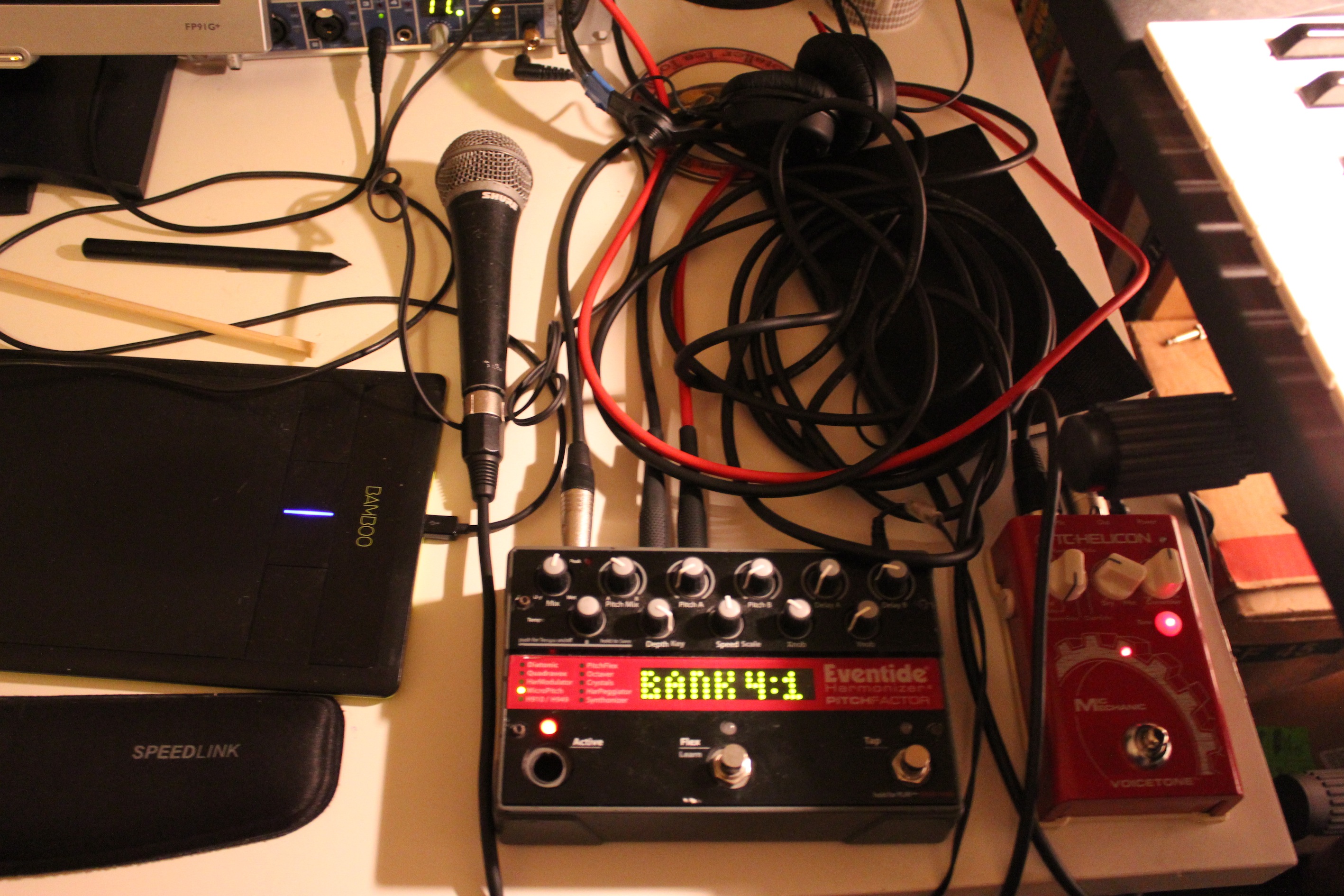 When I was taking the Wraetlic show on the road, i realised I needed a way to effect my vocals live without using the Kyma (it’s massive) and a guitar pedal seemed like the best bet. I tried out all the TC ones, which were far too polite for my tastes, as well as the Roland Aira voice box thing, but the Eventide wins it hands down. It is expensive, though i managed to find an ex demo one with no adapter for good money, and it has only broken twiceâ€¦hahaâ€¦basically i give my gear a hard time on the road, and it is easily fixable. Being Eventide, it has many of the programs from the old Harmonisers including the micro-pitch adjusters that give width and sheen, and a load of other more esoteric effects culled from their bigger effects units. I especially like it for adding a sub bass to the vocal, as well as the more obvious harmony options and it always sounds rich and expensive, apart from when I’m singing through it.

I use it in conjunction with a small TC Helicon pedal called MicMechanicÂ that includes gain, toning, pitch correction and reverb. Very handy indeed.

Here is someone putting their synth through it: https://www.youtube.com/watch?v=BgySwJRULyc

Hardly very original am I? But the Maschine is excellent, and since they added the colouration circuits to the outputs it is even closer to the old MPCs for bashing beats together. It has its quirks, but this gets used for at least half my drum parts, even if I just bash in the beats and then export the MIDI file. It is also my main drum machine for playing live which is where it really excels, and having the ability to play drum parts live in so many layers is very powerful. It has also survived 4Â years on the road with me which speaks very highly of its build quality. 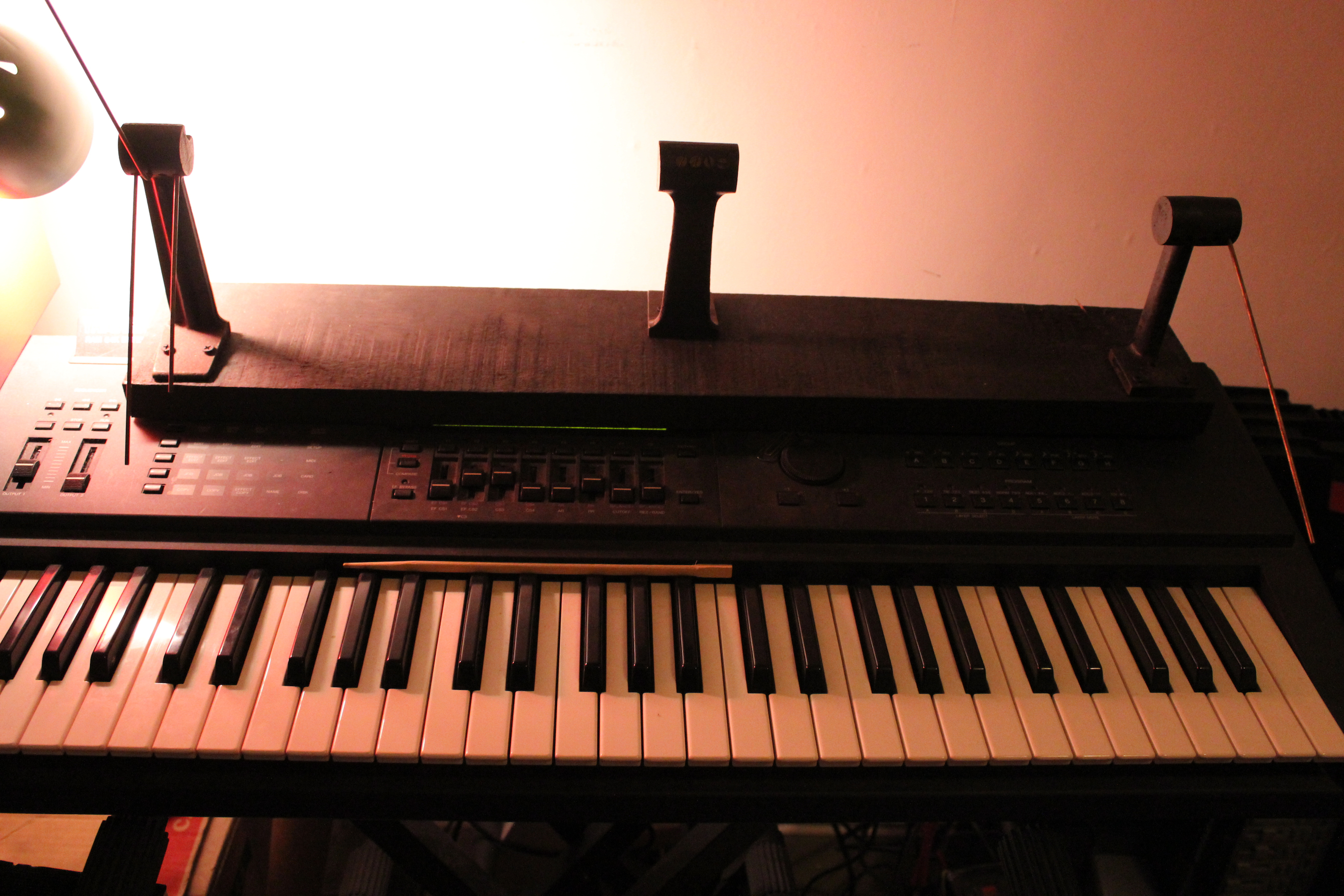 It looks like a satanic sculpture but it is just an instrument. Designed by Florence To and knocked together out of old clock bar gongs and a piece of wood, this was created for our Etanan installation piece in a small swimming pool in Glasgow. It is mic’d up by connecting a contact mic to the soundboard and produces an incredibly powerful sound when bowed. Everything from ethereal whispers to grinding metallic rattles. We were very pleased with it. Half the chimes fell off because the pool was so bloody cold but enough have survived to keep it usable.

My MIDI keyboard. I bough it from a pal in 2001 I think and it has served solidly ever since. No idea what the synth sound like as I’ve never used it. Maybe amazing but I’ll probably never knowâ€¦.looks too menu-driven for my liking. 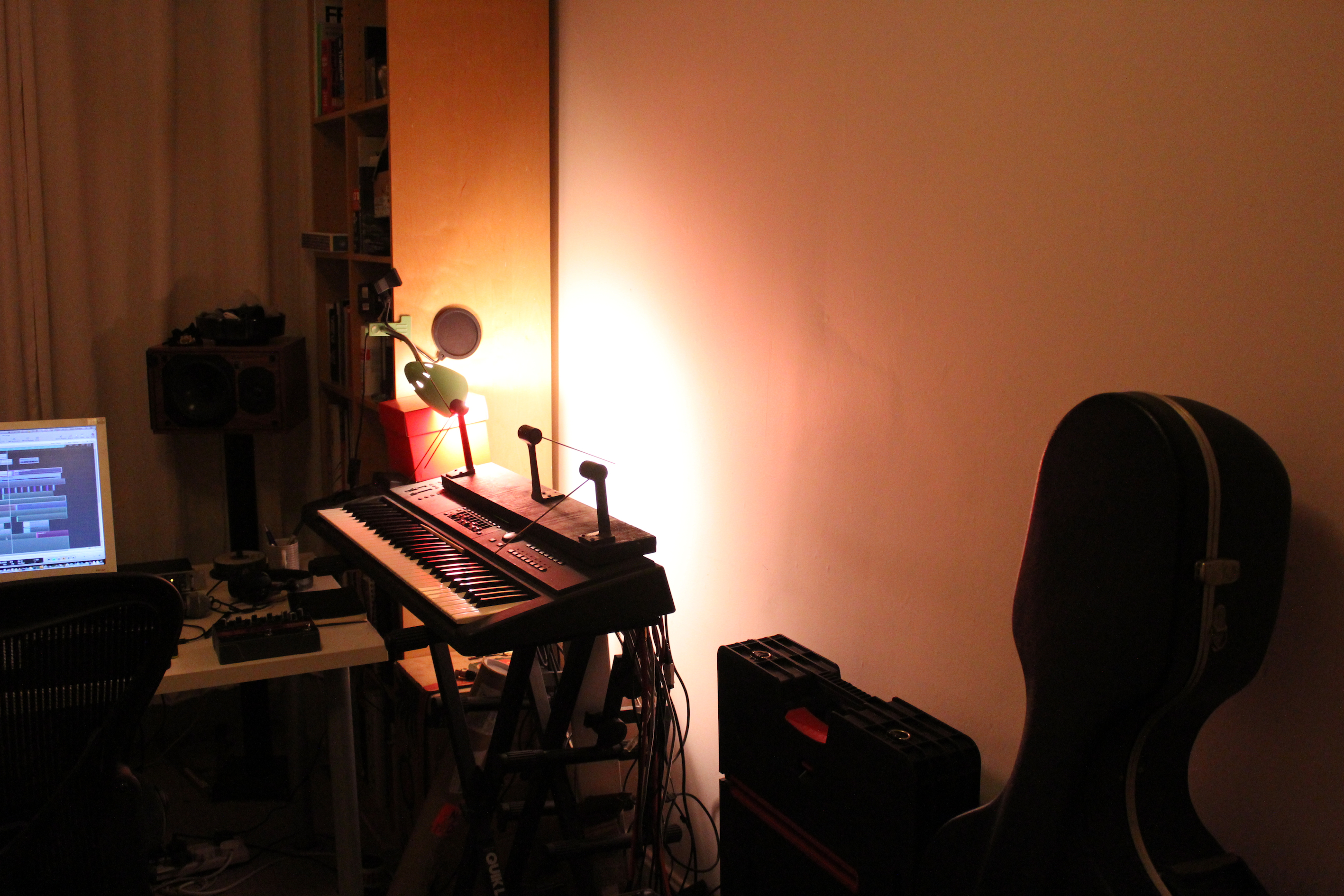 My original instrument, and one that I am still more influenced by than nearly anything else. I wish I played better but regardless of that, I love to write for cello, and I’m increasingly interested in using it as a source of interestingÂ timbres, both live and in the studio.