So it’s pretty obvious that I’ve been in the studio heavily as I’ve completely neglected my website. I didn’t even manage a Best Of 2011 chart, but I find I buy a lot less music if I’m working flat out.

On the positive, what this does mean is that there will be a faiar bit of news on the release front soon.

In the meantime, I thought I’d give a rundown of my favourite software in the studio, highlighting great developers and incredible tools. For the first time the boundaries between digital and analogue are becoming properly blurred, and with the renewed focus on hands-on control this looks set to continue further.Â I’ve basically focussed on plugins as this is the format I used most tools in, and because talking about hosts is more of a moot point when you use Logic, Max etc.Â So here’s my Top Ten Tools: 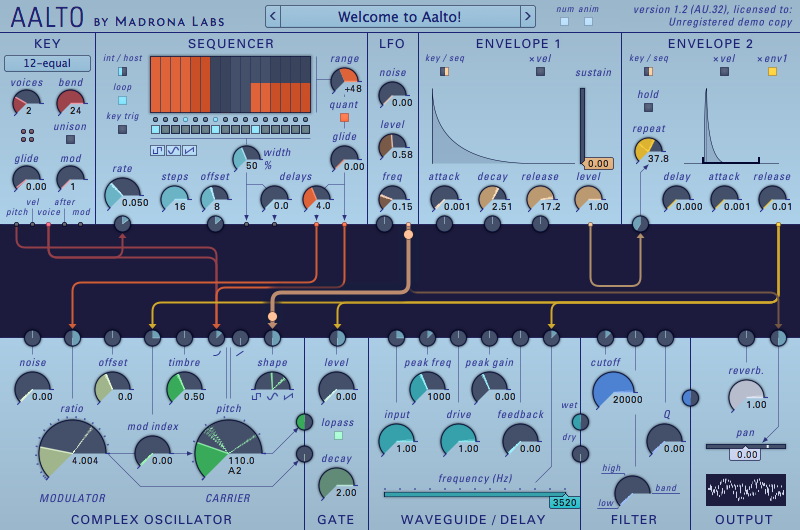 I always bang on about this because it’s simply the ultimate synth in my opinion, and perfect for the way I work. The interface is elegant and uncluttered and this is something that so many software manufacturers forget. With software it’s easy to add 1000 new features, but if that involves 100 new sub-screens, then ultimately it’s taking the joy out of using it and making it inscrutable. Aalto is the antithesis of this approach, with a seemingly simple set of features which interact beautifully. It’s capable of creating everything from fully synthesised beats, acid squelch and delicate pads to the sound of a wooden stick being dragged along a metal railing. The shit. 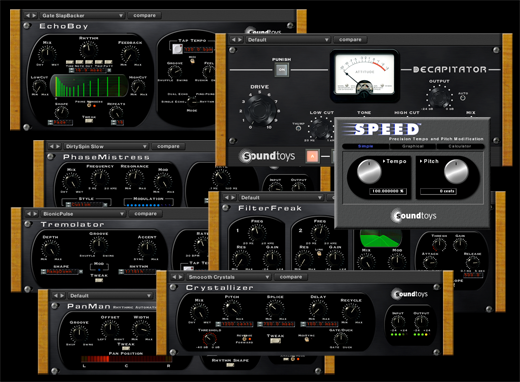 For a long time I was utterly underwhelmed at the idea of delays and filters and things which seemed to just do simple tasks. I always went for effects which did the most obviously out-there things to the audio. But I was stupid and young, and now I know that having a good quality delay and filter is really the cornerstone of good electronic production, these being the finest in my opinion. I won’t list all of the included plugs as that’s on the website, but the analogue drive plugin Decapitator, the delay Echoboy and the filter Filterfreak are all used on every single track I make. The analogue quality of the sound is what sets them apart as well as the deep features, although I still wish you could automate all the weird controls – Soundtoys, you hear me? 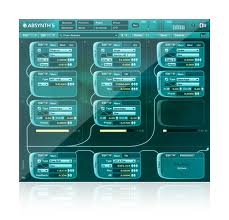 Absynth is one of the majors. it’s been around a long time, and I had an early shareware version when it was still under Brian Clevinger’s name. No company would have ever come up with its mad bendy Geiger interface, so it was clearly the work of one man. It was and is total genius. Infinitely flexible, and capable of tones that no other synth is capable of, it’s a sound-designer’s ideal tool. I still find the oscillators and waveforms too ‘digital’ for my tastes, but ironically it’s capable of some of the most organic tones of any synth. Making the envelope system elegant and useable has been one of NI’s greatest advancements with it.

Including Reaktor would just be a cheat really as it does everything, so I thought I’d pick out a single stand-out ensemble. I tend to use Kyma as my geek outlet so Reaktor for me is a covenient array of ensembles created by other talented folk, and this is one of the finest. It’s an emulation of the famous Synthi AKS, one of the world’s most desirable synths, and it is pretty mental. But if you spend time with it, and learn its ways, it will reward with really outstanding sounds. It has a bite to its sound which is rarely captured by other Reaktor ensembles, so full credit to the creator ZooTook. 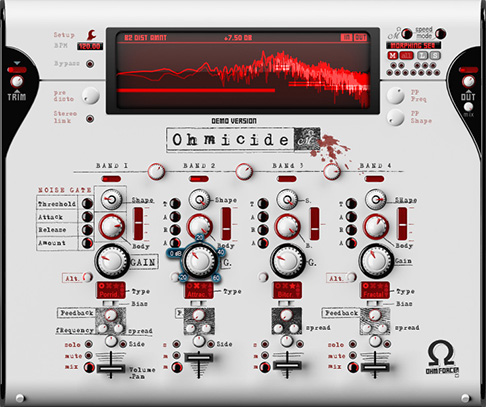 Utter filth. Created by the French eccentrics over at Ohmforce, this is the daddy of destruction processors. There are something like 25 types of distortion, each in 3 flavours, and each assignable to one of four bands, and all of them can be tweaked into shape easily using the various other parameters. It’s a miracle that it’s actually so easy to use. I also only recently discovered the Hi-Quality setting under the hood which increases the resolution so it’s even smoother. It’s a work of art. 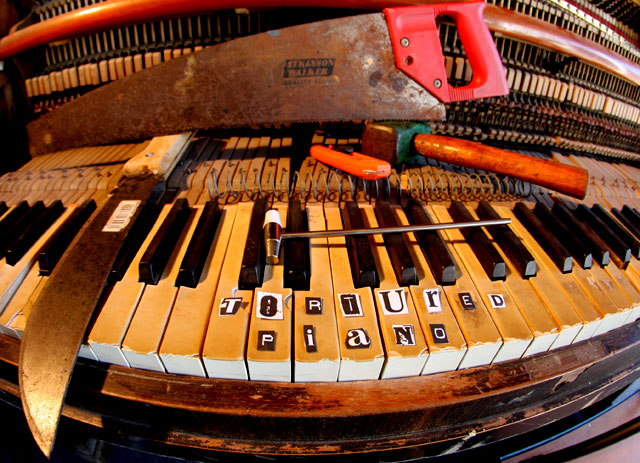 There is a tendency for people to overlook the importance of random sound in their productions, from noise to found sound to jitter. However there are Â some imaginative sample creators out there who are creating fantastic sample sets from weird sources. in the list in the title, we go from the most polished (Soniccouture) to the cheaper and more leftfield (Hollowsun) to the raw material madness (Hiss+Roar), but I could list 5 more good ones at least. There are also hundreds of websites out there devoted to sound in many forms, and if you look about a bit you might find something which no one else has thought of. Just get out there and look around. I should also here give an honourable mention toÂ Freesound.org, home to thousands of home-recorded samples of every description, and a vital source of fresh foundsounds.

These were some of my earliest finds, trawling through shareware sites looking for interesting things which make noise, and they still deliver on a daily basis. As time has gone on I’ve found my allegiance switch between the different effects, but this is testament to their breadth and quality. They are distinctly lo-fi but all the more appealing for that. Geometer and Transverb are currently the ones I use the most, and they are still unique. And they are free to anyone that can be bothered downloading them, so you’d be a fool not to really. 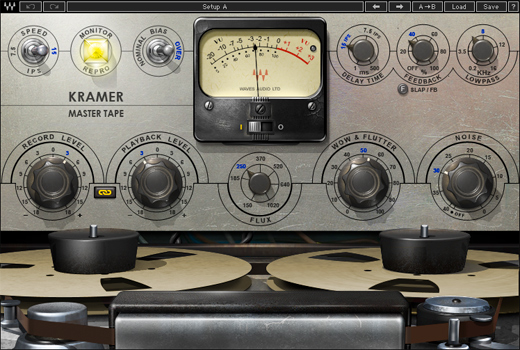 This is what I mean when I talk about the blurring of digital and analogue, as we’re now reaching the point where analogue emulation software really does sound analogue. This is an emulation a reel to reel tape machine with a valve stage, and it just sounds superb. I like my sound destroyed and this allows ample options for taking the machine too far and adding noise in all its forms, whilst retaining a warmth and openness that is otherwise rarely found in computer music. It also works as a softener on multiple tracks, bringing a subtle roundness to the overall sound. And if you hurry it’s still half price over at Waves. Ultra-bargain. 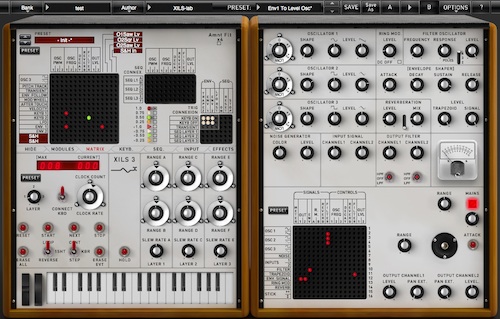 It’s clear that I’m mildly obsessed with the Synthi AKS as this is another emulation of that same synth. However this one sounds very different and has a load of additional features, including a stellar chorus effect. Firstly it doesn’t have the bite of the Reaktor version, but this is replaced by a real analogue warmth and roundness which makes it much more suitable for strings. Its feature-set is also much more comprehensive, including a very deep Â sequencer, keyboard behaviours andÂ aforementionedÂ effects. It’s a great combination of character andÂ usability. There’s also an excellent value LE version which is nearly fully featured. 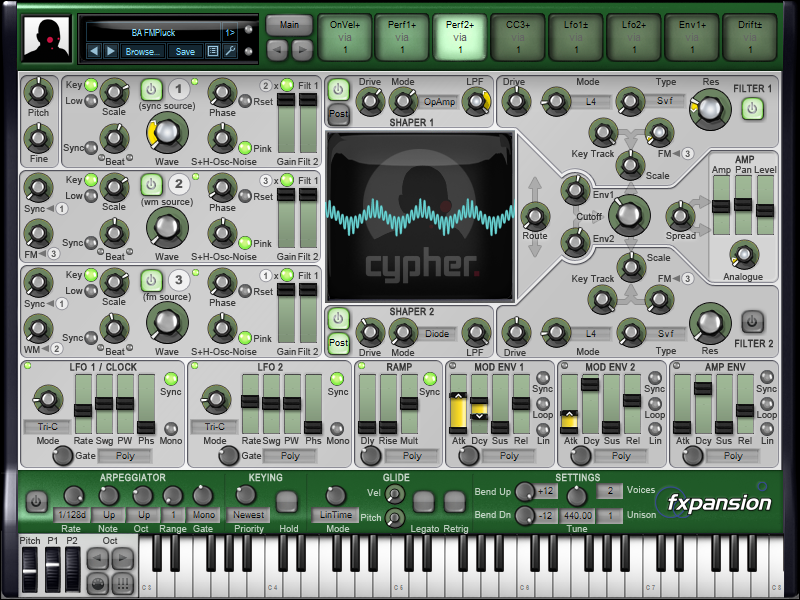 There’s no question that these are definitely some of the most analogue-sounding synths out there. They have a name and associated marketing imagery which conjures up images of trance-kids knocking up hooks on the Playstation, but in reality they’re serious synthesisers. There’s 3 of them and a separate control module which can be used to join them all up which, if you can be arsed, allows for an incredibly varied range of uses. The Cypher is the main attraction for me, as it has an architecture which lends itself to cross-modulation and all sorts of interplay between the sections. This is what to look for in creating a cohesive, lively sound, and this is what it excels at. The Amber string synthesiser Â is focussed on a particular era of string synthesis so its sound is quite distinctive, but the tone is fantastic and the modulation system is second-to-none. 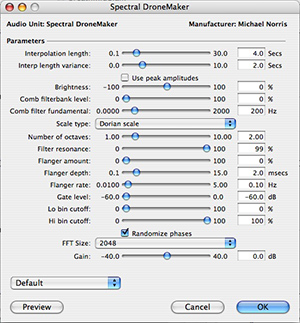 There was a time when this style of spectral synthesis was the preserve of high-end sound environments and Aphex Twin, but now it is available to all for free, as Michael Norris generously doesn’t want your cash. The suite is massive and includes a raft of plugins based on the same underlying spectral techniques. It is especially good at blurring, phasing and elongating sounds and the plugins allow you to approach this is a load of different ways. I especially like to use it to hide my vocal shame, and to instantly freeze sounds. The interface won’t get you excited but in terms of sound It’s a no-brainer.